25% of one single item get offer 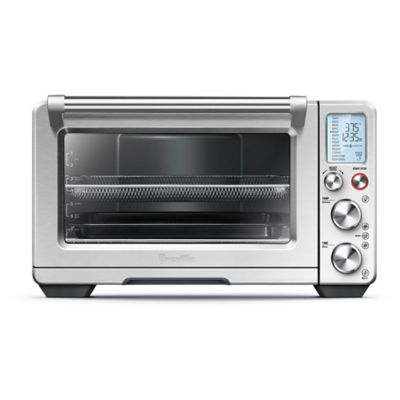 The dimensions according to Breville are 17.2 X 21.4 X 12.8 H ! I almost gave up buying this because it was to big according to BBB dimensions of 26 X 18.5 X17 h which must be the box dimension? It was not going to fit under my cabinets which I thought was a huge mistake. When I checked the Breville website I found the proper dimensions.

mother.5 years ago
Not Recommended

Love the way it looks and easy to use, but it did not clean well after the first air fry use. I only got this product because it had the air fry feature. Strange that the air fry tray that comes with the product says right on it "DO NOT USE WITH FOODS THAT DRIP WHILE COOKING" Every food that you air fry is going to have some natural juices. Product is misleading. Not worth the money. Better to get just the convection oven only model and a separate air fryer to use.

We are a family of 5 and this is the most useful kitchen appliance I have. We’ll worth the price. We use ours several time a DAY. We’ve had ours for about 4 years and I recently purchased one for my mom as a Christmas present because she loves our so much. My regular size Oven is also a convection oven, but the results on the Breville are much better. Not to mention it preheats way faster. Buy it, you wont regret it.

Can be used instead of oven for almost all our needs

Small dent but did not notice till after one use

Great otherwise would have been a five if not for dent.

I bought the Breville Smart Oven in October 2017 and was excited to find it on sale at BB&B. I thought it would be great to have all the features of different appliances in one and have less cluttered countertops. I would pay for better quality this time! I was so excited to try the healthier air-fryer feature and was never really happy with the results and what is more frustrating is that there are no instructions or recipe book included for cooking times. I tried going online but the recipes were very limiting. Eventually, right after the warranty period the timer feature no longer worked and the machine would turn off and I would have to restart. So basically we use it for re-heating and even at that I have to constantly check to see if it has turned off. Useless for anything else really. Very disappointed, I was hoping for better quality like some of my other splurges, which have been worth every penny, like my Vitamix and Dyson purchases. So needless to say, I am now on the hunt for a new toaster oven. I hope whatever I choose will be worthy of a positive review!

We have had Breville ovens for a long time , got this one because of the extra large size and the air fryer. Ii feel like I have double ovens in my kitchen now without the remoldeling.

It does a good job! I like the function’s it has and the size! It is large enough to accept most things we cook. The only complaint we have is it does not tell what shelves to cook different things on. Like biscuits, cakes, etc. also do not know when to use the convection fan! They should have included a guide for simple things you cook, not just recipes for fancy foods on the internet.

I loved this oven and never used my stove oven. Yesterday something happened to the function buttons and they stopped working. The start button turns on the oven but I can't adjust to the temperature or how I want to bake, roast, broil, or toast ect. I have had it for 3 years and the price I paid I thought for sure it would last longer then that. Don't think I will be buying another one .Right now I am upset.

First gen still works great, and this one is even better!

We've had the first gen Smart Oven for several years, using it daily for just about anything. The only aspect that limited our use was interior space. Now with the Air Fryer Pro, we can cook anything that our oven would do, better, and with less energy consumption. That's also less heating the whole house in the summer - another advantage to these efficient, small form-factor ovens. Though we used the first gen daily, it doesn't seem like it will wear out anytime soon. So we'll keep it around, or donate it to a family member. This is one of the best values in kitchen appliances - ever.

Not great on instructions, but the combination of air fryer, oven and toaster is excellent. It gets easier with each use. Have not tried dehydration, but baking/roasting an entire chicken is easy.

I love this air fryer/toaster oven. I can cook all sorts of items with ease, and it is quite precise in its timing and temperature. An absolutely beautiful unit and very easy to keep clean. No oil dripping or running out like other units I've owned and when you cook sausage, burgers, or steaks and it has a great viewable window to monitor what you're cooking. Just a great cooker and well worth the higher price over other units. Get one, you won't be disappointed.

Top of the Line. Exceeded Expectations

I purchased this as a gift for my family. What a great investment. They are using this almost exclusively for all baking, roasting, warming and everything else needed in the kitchen. Compact, outstanding performance and happy outcomes to all meals.

I have had a Breville Oven for many years and as one famous Food Network Chef once said he was, "fanatically dedicated" to his "Breville Toaster Oven" and so am I. I have never had a more satisfying appliance than this product. The supplied accessories were very well made, heavy duty stainless steer throughout. Two reversable wire racks for 8 different rack positions allows precise cooking/toasting at different locations according to the food being prepared. A 9"x13" roasting rack that fits into a 9"x13" roasting pan, a 13" pizza pan, a full size heavy duty stainless steel Air Fry/Dehydration basket and a front loading crumb tray that slides out very easily. I had a well known air fryer, used it a few times and it went into a cabinet never to be used by us again. The capacity was poor, you had to open it up and "shake" the basket around to mix up the food so it would "fry" evenly. Not worth the effort and way too much hassle. I ended up giving it to a close friend who had mentioned they always wanted an air fryer, they used it a few times and they gave up too! The Air Fryer portion of this oven has outperformed the other I had TEN-FOLD, as an air fryer, it's the best. And that's not the best thing about this oven. Frozen french fries almost never come out very good, but the Breville put out the best french fries we have ever had at home. Almost better than a famous fast food chain we have had them from before, almost, but not quite (pretty close though). The "Super Convection mode really moves the heated are around to give everything a nice crispness. Wouldn't recommend usinf it to fry chicken or anything greasy, it would make a real mess. It has almost replaced our full size convection oven in the kitchen, we find it much more convenient and efficient to use it. You can read the description of its many functions, but I'll tell fou how they have worked for us. I have not received anything for writing this review, I just like the product so much, I want people to know how well it works and can make their lives a little better. Toasting, how hard is that? Any device can toast, but I've never used a toaster that works as well at this one. The bread comes out nicely & especially evenly toasted on the outside and has a nice crunch, but the inside of the bread has a unique consistancy that is difficult to describe, you just have to try it. Of course that's just my opinion, it may be different for others. Bagel toasting has been perfected here, nice crunchy top (inside) and warm bottom (outside), uniformly toasted & the inside consistancy is perfect. Roasting vegetables is so easy and they come out perfectly roasted. The BAKE function is probably the most used function, especially with convection on at normal setting. Just had a meatloaf last week and it was fully cooked and still juicy throughout. Everything else we made using the bake setting proved to be evenly cooked throughout and nothing was ever dried out. BROIL is not a function that we ever use, in this or the full size oven. PIZZA is just the best, weather a packaged frozen pizza or a fresh pizza, it cooks better than anything I have ever used, even in the full size oven with a pizza stone. Cooking a pizza on the supplied pizza pan came out perfectly with a crisp crust and throughly cooked through right to the center, weather it was frozen (ise FROZEN & CONVECTION) or fresh (use only CONVECTION). REHEAT is the only other function we have used so far and warming up leftovers is a breeze, it circulates the heat so evenly that food warms up perfectly throughout. This appliance has proven to be one of the most useful devices we have ever had throughout the years and no other device has ever cooked food so uniformly than the Breville Oven.

The Smart Oven Pro is seriously flawed. I did air fryer Brussel sprouts today and recipe says 8-10 minutes at 400. It took 25 minutes and they still weren’t crispy or even done. I have found this to be true with almost all the functions.

Everything I need in a stove

For the price could have come with on more dehydrating basket. Other than that, I've never need disappointed with a Breville product. Love the stove.

I have had my Breville Air Fryer Pro for over a year and it still emits a plastic smell when I cook anything it. I thought it would go away after a while or “burn” off but it’s still happening.

Oh my, I love this oven. My gas wall oven stopped working and was not repairable. Decided to go with this oven and I love it. It does everything and more way more. I converted the wall space into storage put my microwave in that space along with other items my countertop oven is on the countertop. It’s a dream. I give it 10 stars. Ty, Breville. PThomas Houston, Tx

Love this new appliance! Versatile and perfect for all my oven relates needs in the kitchen.

Bought the Breville smart digital oven 3 yrs ago, wife loves it . Door spring broke - call customer service , even though pass warranty period but company stay behind their products and sent me a brand new one including free pick up. Thanks.