the beyond cooking event: get 2x points on kitchen shop now

save up to 50% on winter clearance! shop now 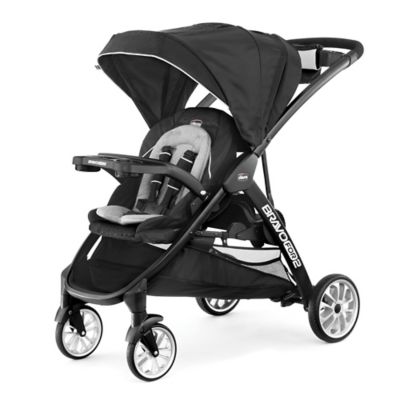 Just what we needed

I purchased this stroller since my Contour double stroller was just too much when I only had one child with me or if my big guy wanted to walk instead. The quality is great, I love how smooth it glides, and the storage underneath is awesome. I also like how the rear seat is padded since my two year old gets tired of standing after awhile. It is also super easy to open and close when you have your hands full. My only complaint is that the front seat does not recline. I knew this when I purchased it, but did not realize how much I wish it had it until after I started using it.

i wish i could trade it in

JasminG.3 years ago
Not Recommended

i hate the stroller. its super big and i never used the toddler sit. when i put the baby in front it doesnt recline back so he sits up to straight a d he leans over. i hate it. i am currently looking for another stroller. wish there was a way to trade it for a regular stroller that is not a double.

I have a 2 month old and a 2 y/o. I got this stroller because I have a keyfit30 that i wanted to use with the stroller without buying attachments for a different brand. The toddler is rear facing on a tiny bench seat, so they couldnt nap in there if they wanted to. i had her strapped in tight and she still bent over and kept touching the wheels, the ground, the basket below, her brother in his carrier, she attempted to stand up and kept taking the drinks out of my cupholder and keys/phone out of the little storage pocket. The only other double stroller by chicco is the cortina double stroller which at the time wasn't available for order. Its also the only one that can have 2 kids forward facing and can put the keyfit in the front or the back seat. It doesn't have a snack tray but ill take that over this stroller any day. Dont waste your time with this if you have an active and curious toddler.

Definitely worth every penny spent! I have 3 kids all under 5 and this stroller has made my life a little bit easier. Stroller glides perfectly does not get hung up at all. I love it!!!!

I have been looking for a double stroller that isn’t bulky and I found one. I love this stroller. My son loves the sit/stand section. He doesn’t always want to be in the stroller, but nice to have the option.

Is the best option for my 2 year old and newborn. Didn't want s bulky stroller that i would be stuck with once my toddler outgrows it. The small seat can be folded up.

I wanted to love this stroller so much since I paid a lot of money for it, but unfortunately I didn’t. I have a 4 year old that loves it, the seat is perfect for him. But I have a 6 month old and the seat for him is so uncomfortable. It doesn’t recline back, so can’t sleep in it. Doesn’t cover him enough, and there’s like no sides to it, so just doesn’t give him enough support. It’s also extremely hard to turn. Wish I could return it so I can afford something that works for us.

I love this stroller

I love how well made this stroller is. It is super easy to fold and get the car seat in and out. My older son loves being able to stand or sit on the back. We are so happy with our purchase!

With the arrival of our second grandchild and the first being a 2 year toddler we decided to get a double stroller for the walks. We purchased the BravoFor2 LE because of the Chicco car seat the kids were using and the sit/stand option. Ordering on-line was simple, it arrived in 2 days, and assembly was a snap. We took both grandkids (we let their parents come too) to the park. New grandson in the car seat and grand daughter standing in the back. The stroller maneuvered with ease and we were happy with the quality. We look forward to many walks with our grandchildren using the Chicco BravoFor2 stroller.

Great for 2 kids with an age gap

We were originally looking for a Graco ready to grow double stroller because we have a Graco infant car seat already and were looking for something with a jump seat and standing option since our kids will be newborn and 3 but it was very flawed and not comfortable. Enter chicco! The front seat is very plush and cushioned. The jump seat has a cushion as well rather than just a hard bench seat. You are able to click in the car seat and use the jump seat at the same time. The canopy is also able to partially cover the older child. The only thing stopping me from giving it a 5 star rating is the fact that the front seat doesn't recline so it cannot be used for a super long outing where baby would need to lay back and nap and can't be used until baby is 6 months old and sitting up unassisted. It does work with a Graco car seat. I was able to click it securely in which was another plus for us!

Putting the stroller together was easy with the included instructions. Stroller rides great, perfect turning, easy to maneuver. Great stroller with a newborn and an active older toddler.

Love the stroller. The major reason I was looking into this was is because of the toddler sit or stand part of the stroller. My children are 22 months apart and it’s perfect!

Perfect for my newborn and 4 year old

So far this item has been perfect for my newborn and 4 year old. Love the sit and stand option because it’s not oversized and in the way when we walk. Looking at this for my newborn as he transitions out of the infant carrier I wish the seat reclined a little more. We have the frame stroller and a larger stroller both Chicco and love them both also!

In principle, this stroller is great for two kids while it lasts, but the folding mechanism is flimsy compared to the heft of the stroller, and it suffers from the worst maneuverability of any stroller or cart I've ever tried to push. The collapsing mechanism on the first of these I owned jammed hopelessly after about 2 years of moderate use, and the mechanism on the second is already getting dodgy after just a few months. Secondarily, this stroller is utterly impossible to steer. It's five times worse than the most broken grocery cart you ever had, simply due to inexcusably poor engineering. They could have easily fixed the steering with smaller casters on the front or better, with a higher "rake angle" of the brackets on the front wheels, so that the axle wouldn't be almost perfectly aligned with the pivot, giving you no moment arm at all. Did anyone actually try to push this thing around corners before mass producing it? What kind of engineers are they hiring? There's really no excuse for this kind of simplistic design mistake.

Just hard to push and

Just hard to push and turn.

Overall this is a nice stroller. Infant rides in a carseat in front and 2-year-old stands in the back. After a few weeks, wheels are already squeaking.

Back seat is tiny!

Smooth ride until the second kid (toddler) hops on the back seat. Gets super heavy to push and my toddler 3yr.old does not ride comfortably. Maybe it would work for a younger child but that kinda defeats the purpose.

Easy to put together! Easy to collapse and put in the car. I’ve always bought Chicco brand for car seats and strollers. I have 3 different Chicco strollers and this is by far my favorite! And my 3 year old loves to ride on it as well. It’s easy to push. Nice smooth ride. I was nervous about the tires but they are nice rubber tires. Highly recommend!!

Good but not perfect

The bravo for 2 easily folds, has nice wheels which work great on hard surfaces (this is not a jogger nor can it be used as one wheels do not work well in loose soil or gravel)and it is not too heavy. Problem, front seat does not recline for sleeping kids

We had the Chicco bravo for our first born, and It was fantastic. We got this stroller when we had our second kid and it’s been great. Our two-year-old loves to stand on the platform and watch the world go by. He acts like he’s in the middle of walking in a parade every time. I am 5 feet tall, and my husband is 6 feet tall, and we both find it comfortable.It folds up to be so small, somehow it seems even smaller than our Chicco bravo single stroller.

We had the Chicco bravo for our first born, and It was fantastic. We got this stroller when we had our second kid and it’s been great. Our two-year-old loves to stand on the platform and watch the world go by. He acts like he’s in the middle of walking in a parade every time. I am 5 feet tall, and my husband is 6 feet tall, and we both find it comfortable.It folds up to be so small, somehow it seems even smaller than our Chicco bravo single stroller.